The Rats Are Taking Over The Game

A little over a year ago there was a press conference where Brian Burke complained that the rats were taking over the game.  At the time there was considerable press coverage that fights per game had declined over the previous year and the pro-fight contingent used Burke’s comments to point how the game featured more cheap shots as a result.  Except the facts show the opposite is true.

This is a familiar and popular argument, that enforcers somehow make the game safer and the “rats” play a different game when they are in the line-up.   Several of my previous posts provided statistics that showed that argument was false.  As fights per game increase the number of non-fight related PIM also increased.   Feedback from the pro-fight fans refused to believe the research or stated that there wasn’t enough detail in the types of penalties to make a conclusive statement. 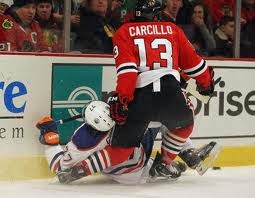 So I started looking for another way to present my theory that fighting actually encourages more cheap shots.   Using detailed penalty minute data from the past 4 seasons (all that was available).  I compared fights per game to a complied statistic called “Rat PIM”.  Rat penalties are those combined minutes that you would assume would be called on a team's cheap shot artists.  I included the following types of penalties in my Rat PIM:

I took each of the teams and compared the fights/game data against the combined Rat PIMs that those teams incurred for the past 4 years.

Teams with enforcers, and/or teams that fought the most, should have the lowest RAT PIM stats.  I mean those teams have made a commitment to cleaning up the game by investing in players with very specialized expertise.  When those players are in the line-up I can imagine all the Rats suddenly sitting up straight and being very polite as they take their shifts.   Teams who do not make the same commitment to fighting, like the misguided Detroit Red Wings, would be playing in a constant state of chaos.  Rats would be running free, hacking, slashing and driving players head first into the boards at every opportunity.  That’s the perception that you would take away from interviews with most general managers, coaches and players.

Except it’s all bullshit.  Below is a chart that has the average of Fights/Game and Rat PIM for the top 5 teams, middle 5 and bottom 5 – sorted by highest Fights/Game to the lowest and showing the last 4 years of Rat PIM data.   There is a clear progression shown – the teams that drop the gloves the most will also incur more Rat type penalties.   If you have an enforcer, or the mentality of “protecting your players”, then your team is more likely to also engage in boarding, roughing, cross checking and slashing.  That’s all the stuff that fighting is supposed to remove from the game.   But if your team fights less then it’s obvious that they play considerably cleaner and that they will take far less Rat PIMs.

Data from ESPN, with the numbers provided by Elias Sports Bureau).

If you want the detail by team there is a chart at the bottom of this post. 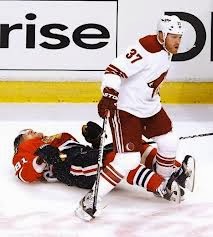 I don’t think that the general managers, coaches and players are consciously trying to mislead hockey fans.  I would be certain that none of them have actually studied this aspect of the game beyond their gut feelings about the impact that fighting has on the game.   Most of them have played the game and have always had an enforcer or two as a teammate, from their junior hockey days forward.   Therefore they look at the schedule and know which teams are likely to dress the role players with the loose gloves.  Both teams will then have enforcers on the ice and they are motivated to play on the edge in order to prove their worth.  I would also guess that the Rats on the team would feel safe to hand out cheap shots because  they know the big guy is there to take care of business if needed.  After the game the coach confidently tells the assembled media that it was good thing they dressed Boomer McHammer because it was a rough game and they needed someone in the line-up to keep the game from getting out of control.

Perception is not reality.  Hockey fans need to stop believing in quotes from enforcers about how they keep the rats honest and rely instead on facts.  Yes real experience at the professional level matters but you still have to apply common sense and real facts.  Based on real data, less fighting would result in fewer penalties, including those not related to dropping the gloves.  Less enforcers would result in a cleaner game and more skilled players getting a chance at the NHL level.  The game would be faster and more exciting.   Who would want that?


Team Detail - Average Over Past 4 Years